MOVIES: Trick Or Treat - The Origins Of Glenn Danzig

In the 1980's movie Trick Or Treat is the character Ragman based on Glenn Danzig?

Like, is that supposed to be Glenn Danzig in the movie?

Gene Simmons from Kiss is also in this movie....what that means for all you dorks out there is that he's probably the main producer of the movie and at the same time also produced Wendy Williams from the Plasmatics solo albums who was also featured in movies in the 1980's....members of Kiss also appeared on her records including Ace Frehley and members of Kiss in the 1980's after the break up of the original Kiss lineup.

So if you see Gene Simmons in the production he's probably the main guy doing it, then he did Wendy Williams and Trick Or Treat and helped to release Thrash Metal.

In the movie Ragman who goes to the High School of rock singer "Sammy Curr" writes him a letter from his old school addressed from  "ragman" after they cancel the High School concert, this is probably which they torn down my High School to to prevent these demonic possessions on the students from this music, then Curr dies right away in a fire, probably caused by Ragman, and comes back and possesses him through an unreleased 180 gram vinyl lp he got from Gene Simmons from Kiss.

You decide....is Trick Or Treat the real origins of Glenn Danzig the real Ragman? 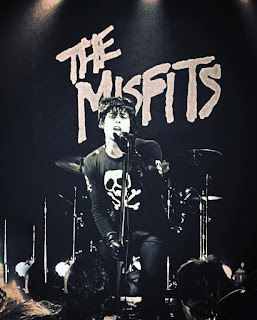 In my opinion this probably took place in New Jersey after the original Misfits broke up and he returned to High School to get his Grade 12 before becoming a solo artist.

My opinion is also that they are all picking on him because he quit the Misfits a couple years earlier.

Posted by Jason MacKenzie at 5:43 AM