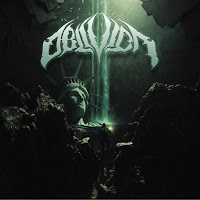 This is Obliveon from Quebec spelled with "E" the other band is spelled with "I" in the name, but the logos look almost exactly the same.

I'm writing this because I own the Great White North Records tribute page, I have nothing to do with that plagiarism issue if it is one. 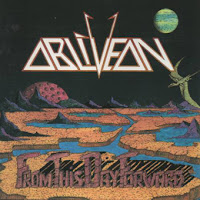 I'm sure all the bootleggers up in Quebec will be mad about that, because it's Obliveon's band manager that started Great White North Records where I got ripped off on my first record.

Anyway, it would be funny to see them all complaining about it if they get ripped off.

Fuck them anyway, plus they owe me money from my old record deal and I got bootlegged off it.

If you want to know what they are promoting up there now in Quebec on PRC Music , the new Great White North Records it's the band Tomb Mold from Toronto and I don't know but they look like they are connected to PRC Music or something, anyway they made Decibel Magazine's top albums for 2018 and they suck.

So if you're what they are promoting today it's Deviant Process from the crowd funding scene and Tomb Mold I think, who were in Decibel Magazine's best album list and are terrible.

People might not know this about the metal scene....just some info.

Before that Great White North Records promoted Unmatched Brutality Records in Montreal, Canada and helped put out the song "Babykiller" by the band Devourment which is a huge song in the real Death Metal Underground.

That is the same time that my band Collapse came out, that's when they were promoting Devourment - Babykiller.

Great White North Records helped release the song "Babykiller" then they abandoned it.

That was where my band Collapse first came out.

That "promotion" also helped to put out by promoting bands like Stabwound and labels like Unique Leader Records www.uniqueleader.com bands like Deeds of Flesh and the label Brutal Bands www.brutalbands.com which just re-opened.

That is also part of the origins of the "pig squeal vocals" (it's a singing style) and the old label Great White North Records was promoting Unmatched Brutality Records directly, that's Devourment and the initial release of the huge song "Babykiller" as well as Unique Leader Records and Brutal Bands Records - but it was just in CD Distribution.

Today I am promoting all that on my own at Forward Regression Records www.banzairecords.com .

Then they were doing CD Distribution for stuff like Unique Leader Records and Brutal Bands Records, and other artists - all headed to BMG Rights Management under The End Records if they had of stayed open.

So all that kind of fell under The End Records back then, which is now owned by BMG Rights Management.

Devourment broke the signing style with the "pigsqueal" vocals around that scene and made it popular - but the actual pig squeal vocal style came from the band Pigsty who was the first band to do that. As far as I know.

The Great White North Records scene is the scene that helped launch Devourment at the same time as Collapse my band and started the  pig squal vocals..."re re re"...like that.

That is the metal scene where I live at and come from and have always been there.

That is the scene I am preserving on my Great White North Records Tribute Page www.greatwhitenorthrecords.com , to help preserve the promotion that "helped" to launch Devourment, Collapse and started the pig squeal vocals with labels like Unmatched Brutality, Unique Leader and Brutal Bands.

That is some Death Metal history for you.