That's what appears to the be status of the local Nova Scotia Government here running from Province House, the legislature here in the Capital of Halifax.

This is what I mean, all the Indians were down protesting at City Hall yesterday about the Lobster Fishery, I went down to check the statues in the Court Yard to see if they were vandalized and spray painted by local Indians, to my surprise the Indians held a rally in the City Hall Court Yard and there wasn't red paint everywhere.

The issue is that there is a pyramid scam in office in Halifax and Ottawa and don't do anything or hand out money.

Every time the Indians or some black group comes out they come running out apologizing and sucking them off to get rid of the threat of two people...one Indian and one Black. 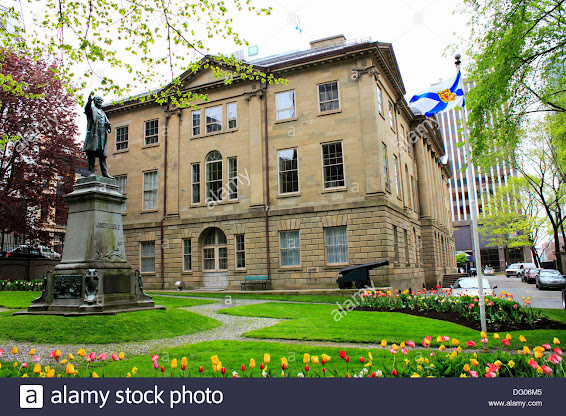 Like that's all they have time to handle down there.

Well, I asked the Joseph Howe statue in the Province House Courtyard what to do...unless you can put their head in a basket and drop it off inside for England then to just keep walking, so I just went home...since that is beyond my powers.

The Native Lobster Fishing Issue is the same as Canada's Prostitution Laws....they changed them and never implemented it for local citizens and then abandoned the legislature leaving all the issues unresolved, before slipping in an illegal Sunday Shopping Law before leaving office years back.

Now like prostitution in Canada people claiming to be Indians are forcing their fishery through, I don't know if they are or not....they look mostly white to me. So the law was never finished and they went ahead anyway and then local fishermen burnt their fishery down.

See, they legalized something and never put it in action...Canada is a scam, just like with prostitution and the Canada Food Guide that they don't cover for citizens and Halifax doesn't help the disabled with extra money.

How can Nova Scotia justify not increasing rental allowances when rent has increased by hundreds of dollars in the last few years, then they refuse to cover the Canada food guide leaving people her on what 1/3 benefits.

Then they always jump on the issue they can handle one black and one Indian coming out over their not legal, semi legal lobster fishery being burnt or banning street checks on blacks by police on Gottengen Street...those are the only issues the Halifax legislature handles.

Then where is all the lobster, tourism and cannabis money going?

I looked up Nova Scotia tourism on youtube and they don't have anything.

So you get to the University Grads in the same area as Gottingen Street on the other side of the City blocks with an actual issue and they always tell you to go fuck yourself.

Let's say you're a grad who wants to enter the tourism business here in Nova Scotia, you go down and ask and they go "fuck you".

Then they have no programs to enter tourism, then they go "fuck you, go do it yourself if you're a grad." ...then they won't give you funding and there are no grants that I could find and if you're broke you still have to pay 25% to get a business loan are they are using that to block new tourism startups at the Legislature in Halifax.

It's so bad there you can't even apply, then all they have is this lame webpage with no services and EVERYTIME it's only if the business is setup already.

If you're a single grad...fuck off and go do it yourself with no money - from their pyramid scam at Province House.

The ones holding the seats.

Like this, go out and do all your own research like on this blog for tourism and then go down to the water front and open a booth with flyers and charge $25 a head to walk people around showing them the local historical buildings.

Then when you ask them for money to open the booth they go "fuck off".

Then if you are on disability and want to do it part time, they go....you get no credit because you didn't pay your student loans, there are no fucking grants so get out of here and stop asking, now...I told you...you don't get a loan because you have no credit.

No fuck off and die.

Well, that what they told me anyway at Province House when I looked it up being a St.FX grad with a Project Management Certification.

Posted by Jason MacKenzie at 12:23 PM