I just noticed this that the album "Aggression - The Full Treatment" , which was released on Great White North Records and is the catalog number just before my album, is apparently a re-issue from the original Banzai Records label.

Since I own the names www.banzairecords.com and www.greatwhitenorthrecords.com on the internet I have decided to step out and make an official statement on this album.

Since I am the owner of these names now on the internet and own Banzairecords.com Heavy Metal News I feel I should step out like some Record Label CEO and make a ruling on this album, so you all know my opinion. 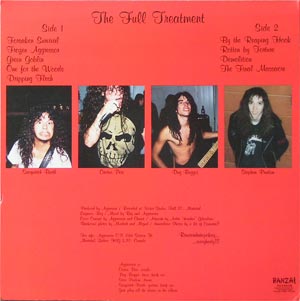 The ruling is that I did not know that this album was apparently reissued form the original Banzai Records and I never noticed it. Now is this something that was in the vault and then they just let it out or something or did I miss all that. 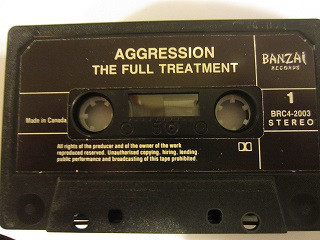 I just noticed this now so I have no opinion on it, but this is important to me because I didn't know if that the album "Aggression - The Full Treatment" was originally on Banzai Records or not, but I never noticed it.

Now it showed up for sale on Banzai Records form 1987 on the collectable lp marketplace for about $100 US I believe.

Why that is important to me is that I own both names www.banzairecords.com and www.greatwhitenorthrecords.com and what they are saying on the lp collectable market is that "Aggression - The Full Treatment" was issued on both labels out of Montreal, and I now own their old names in Halifax. 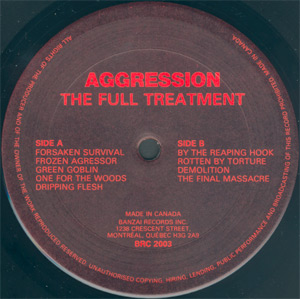 What that means is that this album connects Banzai Records to Great White North Records through the Aggression re-issue, and then my album Collapse is the next catalog number in the album series, then I own both label names on the internet.

That gives my album a connection to the original Banzai Records through the Aggression album which was apparently issued on both labels.

However, I am saying that I did not know that this album was originally on Banzai Records until now, when it has showed up in the lp collectable market.

They are saying on the page that the album was the only album issued directly on Banzai Records with no sublabel like Metal Blade, Megaforce, Neat Records etc. and was a "direct label issue" on Banzai only. 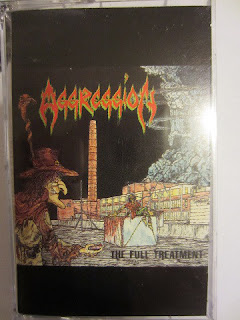 So I have no opinion on this record because I just found out about the Banzai Records version from 1987, but if that is an actual fact then it is important to me because it connects Banzai Records and Great White North Records through the same album release, plus my band is on it and I own both names.

Posted by Jason MacKenzie at 11:20 AM