Here are some more facts about the Second World War from my research notes:

In France after Adolf Hitler took power he took command of the French Military and then put them to work on projects for the Nazi Regime, French soldiers wrote at the time about their experiences  under Hitler's control and were probably later executed for telling of the Nazi Projects.

The major standout is that French Soldiers said they were working on the invention of "mass tourism" under Adolf Hitler in Paris, where apparently the word "tourist" was invented hundreds of years earlier.

The "mass tourism" that we have today has it's origins in the occupation of France by Adolf Hitler according to French soldiers who fell under his command.

The Origins Of The Berlin Wall - The Jewish Ghettos:

Also of note is that the Berlin Wall seems to have been copied from the Jewish Ghettos which they used after the war to separate Germany and Berlin into East and West.

Adolf Hitler divided the Cities into "sections" called Ghettos where the Jewish population would live and then "walled them in" similar to the Berlin Wall later.

In the walled Ghetto's Hitler starved the Jews and held them in isolation in segregated sections of city blocks or "neighborhoods" that were surrounded by walls and barbed wire, later a similar method was used to split Germany in half after the war with the Berlin Wall.

Adolf Hitler's Walled In Jewish City Blocks During The Holocaust Of The Second World War: 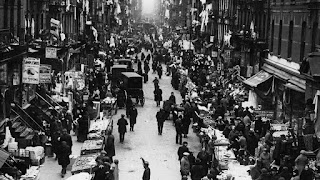 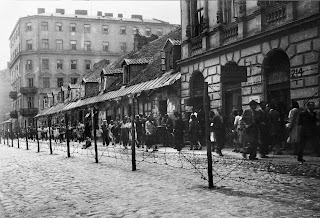 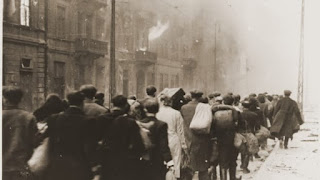 A Jewish uprising inside the Ghettos is famous in the history books, it looks like people dug tunnels into or out of the walled in Ghettos and smuggled in weapons.

The Nazi's may have let this happen to catch people outside smuggling weapons into the Ghettos, after they were caught the people outside sending in weapons were probably killed and the Jews were sent tot he death camps and the Ghettos demolished.

The Soviet Section Of East Germany

The Berlin Wall separated Germany into two sections, in the East this is where Stalin was from in the Soviet Union.

The war between Germany and Russia only seems to take place in this region of Joseph Stalin's birth in the "satellite state" primarily of the USSR, so it seems that Stalin's home region was the specific target of Adolf Hitler.

Copying the Jewish Ghetto walls the allies placed the Berlin Wall in Germany to separate it into East and West, this put a heavy Soviet presence into the Georgian region to end the turmoil with the Bolsheviks and Adolf Hitler and placed the West section of Germany into the present day European Union region.

Like it appears they placed a "plug" or a "cap" that would be like the "burning oil well" of the Bolshevik region from Moscow with a large Soviet presence in the Western USSR Region to end the Bolsheviks and the origins of Joseph Stalin.

If fact were they executed?


Not only this the appearance of the Japanese internment camps looks an awful lot  like the early footage of the Atomic Bomb tests where they show buildings exploding.

The question is did the United States test the Atomic Bomb in their testing grounds on Japanese internment camps before bombing Japan? The United States could have used the Japanese internment camps in the Nevada Atomic Proving Grounds on live Japanese subjects living in camps to examine the results of what would happen in Hiroshima and Nagasaki after they dropped the bombs on the real cities.