I saw these action figures come out on Shopify, Aborted "action figures" for their band, then they have a new record out.

That's where I'm working at, but I'm on Ecwid....that's the same thing anyway because it's the same stores.

I checked to see if the Aborted action figure was out on my shopping cart model but I didn't see it in the product catalogs yet..turns out it's just a pre-order and it doesn't ship until September.

So Aborted got some stuff on there where I work at, like I can sell that on my cart from Shopify on my metal pages...that's how those carts work, then with album streams and band / label press on the front of the blog like at the virtual listening post at my store....now you can buy Aborted action figures on the listening post.

Yeah but that's not out yet until September.

Then with the way those stores work sometimes you can get the item and sometimes you can't or it might have to be a special order with separate shipping like on a television ad on a webpage or the same webpage.

The point here is Aborted has action figures on there...that's what I'm making but mine are Space Command, so there's a good example of what it looks like and it's a Death Metal band selling them so it's some good exposure for the band for everyone to their action figures on Shopify and Ecwid etc.

Right, plus I'm just assuming it's toy release so it's going to be in the order catalog. 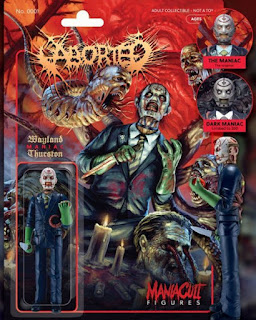 Posted by Jason MacKenzie at 5:18 AM