This Is The Deathmetal.tv Blocked Video

You tube is saying that all the rights holders to the other songs on the video got together and blocked the video in one second cross business.

THEN they are saying they had the rights to block "Collapse-Control Through Fear" on the compilation meaning that YouTube and other rights holders are trying to say they can block Collapse from being shown on the Compilation in Canada.

However, I own the rights to that song.

Meaning they have to show my song and then mute the other tracks but they are trying to block the screen shot of the track list from being shown and are claiming to own the rights to block my music on YouTube from being shown from the other artists like on Relapse Records, which is all Baloney Music.

At minimum, they will have to show my song on the compilation which is within their own rights policy and have to mute the other songs.

They are not allowed to block my song on the video. They are saying they are allowed to do that meaning they have rights to my music which they don't and it is a scam.

I'm sure I will have this resolved at YouTube within a couple weeks so they can correct their policy on my Deathmetal.tv Compilation decision or they will be facing lawsuits for trying to claim my material with Relapse Records and them at their Baloney Pages. 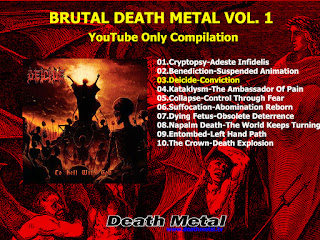 Posted by Jason MacKenzie at 1:29 PM