I am going to turn you in to the Federal Government of Canada for investigation.

Then I am complaining to Halifax City Hall and the Housing Board about you, then I will sue the City of Halifax if you come near my property or when I am out walking.

They just started doing that to me in the last two weeks as soon as the weather started to get nice when I started my walking route in Downtown Halifax, Young Street and Quinpool Road - you are NOT following me back to my apartment from the slums hazing me and blowing kisses at me saying you want to kiss my pussy.

I will make this a federal court matter and turn you into the government in one second.

You all made that girl kill herself, I have no time for this nonsense from you and I am too busy working on stuff like books and music, I guarantee YOU WILL NOT be approaching me in this City from your slums, looking to fight me when I am a University Graduate, writer and musician.

You are brutally assaulting the public and you will be removed from my presence immediately.

Understand? I already turned you in.

...This happened to me before in New Glasgow,NS 11 years ago and it's the main content of my blog, and now you have black people with you from the same people in the North End of Halifax and New Glasgow trying to flame me and assault me in public...I am going to have the court remove you from my presence.

I am posting this information on my blog as public information to set the precedent that I announced on my page that I am going to bring forward my case against the City of Halifax to stop people in the North End slums and Blacks from flaming and harassing me in the City Streets in Halifax.

This is not a "malicious" case against the City of Halifax at City Hall, I am suing to set the precedent that I am being targeted for flaming and hazing from the slums and black people using the Rahteah Parsons case as an example for a precedent in the courts to show the hateful maliciousness of black men in Halifax against white citizens through public harassment and assault in a group against me.

The case I am stating in Halifax is that multiple black men in various locations including the Junior High School and Halifax Bus Stop as well as white people on the Halifax Commons in the same week.

The men flamed me, used sexual references including transgender slurs referring to my genitals ad a "pussy", then Black Men continued the flaming by blowing kisses at me at the Junior High School and Bus Stop in two separate occasions.

I am also claiming that this is assault, because they attempted to instigate a fight which I did not participate in.

When I was approached by the Black Men I told them that I did not know what they were talking about when they assaulted me by attempting to start a fight or psychical altercation. In all three cases I left the scene if the incidents.

I am notifying City Hall probably the week through the Halifax Civil courts that this case is impending to get it registered in the Court Docket, that I am notifying them that I will need time to prepare my case and will be submitted at a later date.

What that means is from this point forward anyone flaming me or assaulting me in Halifax by attempting to get me into a unparticipating psychical altercation will be interfering with an ongoing case, resulting in them owing me financial damages.

This will help to stop the flaming while I prepare the case because any new people flaming or assaulting me will be named in the case that is currently in progress.


I am posting this picture in memory of Rehteah Parsons and the terrible malicious flaming she endured as a white school student, and also to set the precedent that I supporting her cause and if people flame me again with black men I will say it's because I am defending Rehtaeh Parsons in my court lawsuit against the City Of Halifax, I will also try and attend the Rehteah Parsons Memorial Walk. 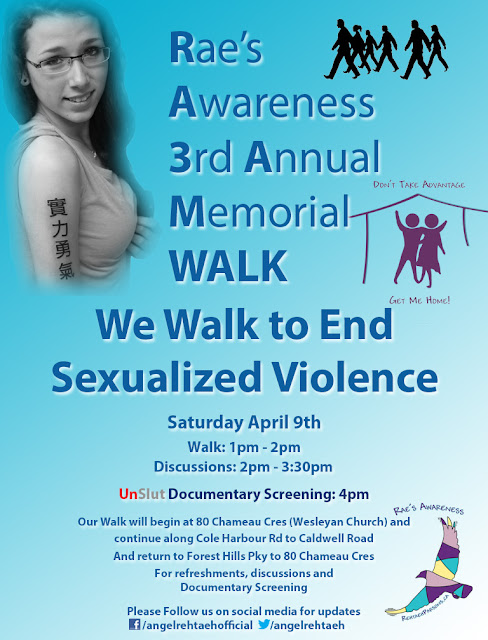